We wanted to do a little more exploring outside Hoi An so we looked up where other people had been on MapMy ride downloaded a couple of routes into a GPS and set off to rent some bikes. The travel agency across the street from where we were staying said they rented bikes. I am pretty sure they rented us their personal bikes, a hybrid for Harold and an E-bike for me so I could “keep up” with my husband. I did not bother to point out that I have completed 5 Ironman Triathlons so I can probably keep up without an E-bike. They were just looking out for the old lady! We paid 60,000 VND to rent both bikes for the day. 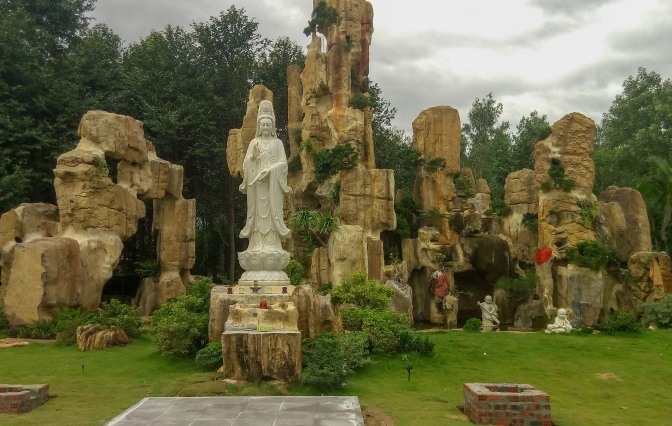 Our first stop was a Buddhist temple which turned out to be under construction but it was a nice ride through villages and farms. We passed vegetable farms, net fishermen and lots of fishing weirs which were probably being used for fish farming. 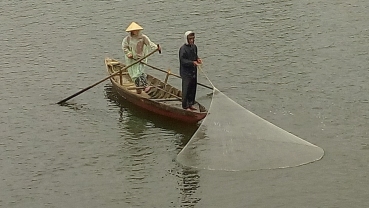 We stopped at An Bang Beach  about 7 km north of Hoi An. It is pretty undeveloped by Vietnam standards, no big waterfront hotels.  We were not allowed to ride our bikes close to the beach and were required to pay to park them. The sign said 10,000 VND, the lady said 20,000 which was quickly reduced to 10,000 when we pointed out that we had read the sign. The water was very rough and definitely not suitable for swimming. But it was pretty and there were several restaurants.

We rode from there to Cua Dai Beach which was once the most popular beach in the area. The beach has eroded over the last few years and there are sandbags everywhere. Some of the large resort hotels have been abandoned and some of the smaller seaside hotels have been reclaimed by the sea. A proposal has been made to spend $30, 000,000 to save the beach from being entirely destroyed. 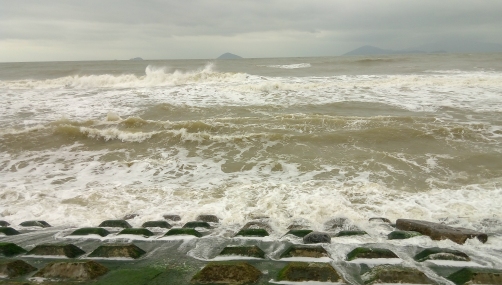 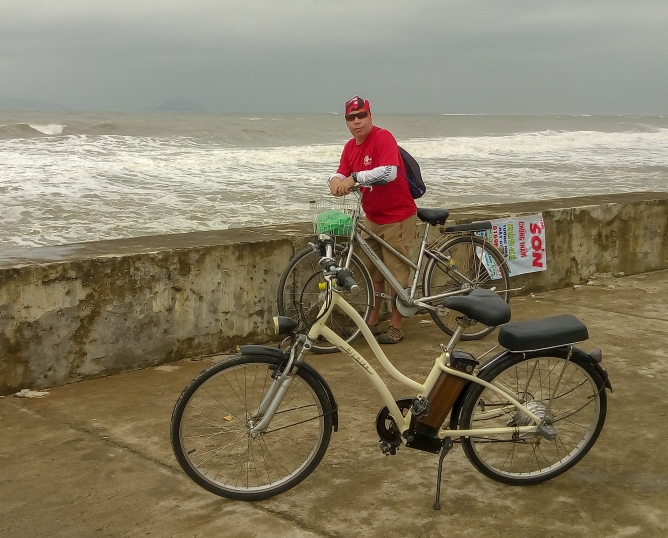 We continued down the road and found a lighthouse. A man working close by offered to let us go to the top for 100,000 VND we got him down to 50,000 VND for two. I am still not sure if we had anything to do with the light house but we climbed up and admired the view.

We got a little lost on the way home and ended up riding through a local village which was definitely not a tourist destination. There were large boats being built and repaired largely by hand.

We followed the numerous signs to Coconut Island we were not sure what it was then but I now know that it is a private mangrove waterway where you can ride in basket boats, fish for crab and watch rowing basket boat performances. Its about 5 km from Hoi An. We never actually went there, we followed a road out into the fish farms and ended up at a place where they wanted us to try basket boats.

We were the only ones there. We had an overpriced beer instead. Grandma stood looking over my shoulder looking at the pictures on my phone. We tried to explain using pictures of snow where we were from. Pictures of snow generally fascinate anyone in rural Vietnam. The daughter and baby were brought out to meet us I don’t think anyone understood what we were trying to say but we all had fun.

We tried to continue through the fish farms but the road became a dirt path that we could not get the bikes down. We did about 28 km of riding. Definitely worth doing as we saw lots of stuff. The E-bike was interesting, the brakes did not work very well so I was a little hesitant to pick-up speed! 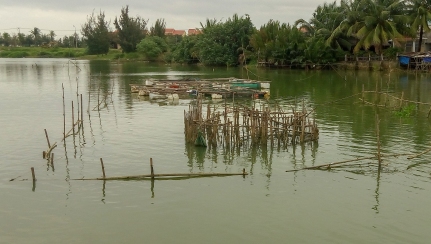 We finished the day at the local banh mi cart, Phi Banh Mi Banh Mi is a local specialty and much has been written about which is the best place to get it. Its best described as sliced roasted pork with various spices and sauces served on a French baguette. Baguettes were introduced by the French and you see then everywhere. Odd in a country that grows much rice and to the best of my knowledge no wheat. Australia exports more wheat to Vietnam than any other country. Canada also exports wheat to Vietnam.

Phi Banh Mi was rated #1 on trip advisor at the time even though it’s basically a food cart with a bit of seating. The rating is well deserved the Banh Mi was outstanding.

We spent our final morning in Hoi Ann visiting the old town. Your tourist entry to the town includes entry to five of the old houses. We started with the old house right beside our hotel which was “free” we got a tour which included the 92 year-old grandma who was asleep on a bed. These houses are generally still inhabited and the families give tours to pay for the upkeep. There was a dresser on wheels so it was easy to move during the floods and a bed which was also used as a table. It did not look very comfortable. The father was a silversmith and he cleaned my ring for free. We were of course given the opportunity to buy crafts or make a donation at the end of the tour. 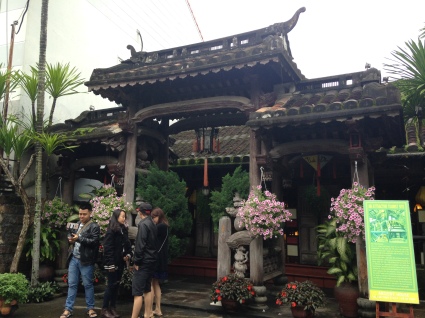 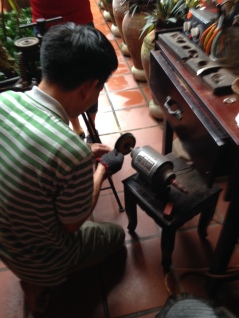 At this point Harold and I split up to go and see the sights. Thinking that we would see different things but we always seemed to pick the same ones anyway. I had also decided that my big spend for the trip would be a leather purse. Hoi An is famous for cheap, high quality leather work. I saw one the first day I was there but when I asked how much I was told $180 US which is way more than I was willing to pay so I did not even try to get the price down. I found one outside of the old town which was pretty similar for $55 US and tried to buy it but I was told it was just a sample and they all had to be custom made. This was a bit of an issue as our flight was leaving town in 3 hours. They assured me it could be done so I picked the leather and the price crept up to $65 but they promised to have it done for 12:30 pm. Our airport pick-up was scheduled for 1:00 pm. I had to pre-pay which was a bit of a risk and it was looking bad when I could not remember the PIN number for my VISA card (we rarely use credit on these trips).

I went back to the store at 12:30 the two girls working there were playing video games on their phones and singing karaoke but at exactly 12:30 a scooter arrived outside the door with my purse.

I'm a competitive age group runner and triathlete who just turned 57. I coach (www.k2jfitness.com) and I work for Bushtukah. I also love to hike and travel. Life is for living get out there and do it! View all posts by judyapiel

2 thoughts on “Vietnam- Hoi An & a local bike tour”